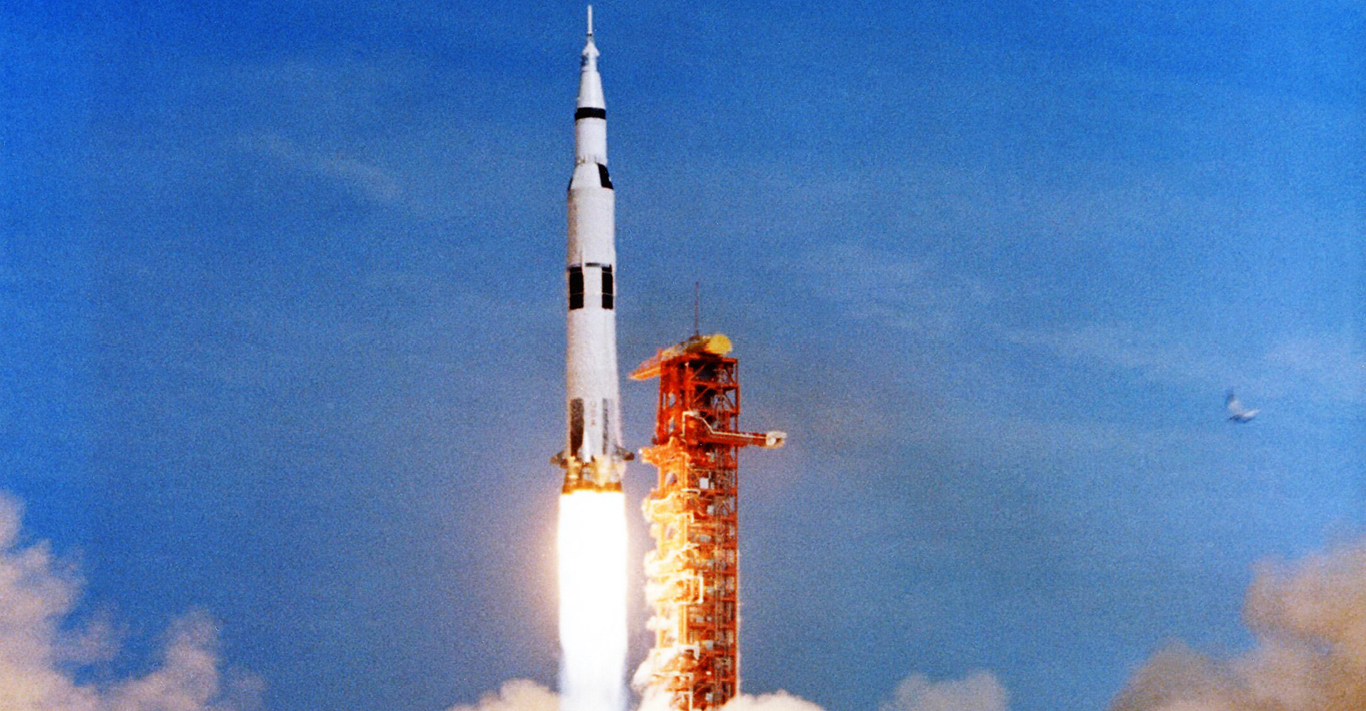 The Apollo 11 mission blasts of

As any horophile will tell you, the Omega Speedmaster ‘Professional’ is famous for its inextricable links with space travel following its finest hour – 02.56GMT on 21 July 1969 – when Buzz Aldrin stepped off the Apollo 11 ‘Eagle’ to join Neil Armstrong on the moon.

Both had been issued Speedmasters, but Armstrong left his on board as back-up for a faulty mission timer, making Aldrin’s the first watch to be worn on the moon’s surface.

But the Speedmaster was already familiar with the mysteries of outer space. In 1962, Walter ‘Wally’ Schirra wore his privately purchased example of the CK2998 model during his six orbits of the Earth inside Mercury-Atlas 8, after which Speedmasters were officially ‘flight qualified’ by Nasa to became standard operational equipment. In March 1965, astronauts Virgil Grissom and John Young wore them during the Gemini III mission, while in June of the same year, Ed White’s Speedmaster accompanied him on the first American space walk during the Gemini IV voyage.

Speedmasters were also used on Apollo 13 in 1970 (for timing the critical engine burns needed to safely bring the damaged craft back into Earth’s atmosphere), for Gene Cernan’s Apollo 17 moonwalk (the last to happen) and throughout the Space Shuttle years. They continue to play their role today, too, on the wrists of crews visiting the International Space Station.

Omega was one of four makers to respond to a request from Nasa for watches that might prove worthy of being certified for space travel and, following a destruction testing programme that started in 1964, it was the Speedmaster that came out best.

One of the reasons it out-performed all of the others was undoubtedly because it was fitted with an exceptionally tough, reliable and accurate movement, the now famous Calibre 321. At the time, the automatic chronograph was yet to be perfected – and, due to the lesser effects of gravity in space, a self-winding movement wouldn’t be dependable anyway.

As a result, the successors to the Calibre 321 – the 861, the 1861 (since 1996) and the 1863 (a decorated 1861 for models with transparent case backs) have all been hand-wound, which is exactly the way the Speedmaster Professional’s legions of fans like it.

In fact, it’s fair to say that their forensic knowledge of the Speedmaster often verges on the obsessive (it’s one of the most heavily analysed watches on the internet) and the correctness of its beating heart is considered vital.

So there was high excitement back in 2019 – the 50th anniversary of the Apollo 11 moon landing – when Omega set up a dedicated workshop to reproduce the original Calibre 321 movement. Initially offered only in a £45,000 platinum-cased, onyx-dial limited edition, the 321 last year became available in a near-perfect, £10,000 replica of the 1963 Speedmaster.

But now Speedmaster lovers are coming to terms with the fact that, after a quarter of a century of loyal service, the Calibre 1861 has been pensioned-off in favour of an all-new movement (still hand-wound) called the Calibre 3861.

The mechanism has been waiting in the shadows for two years, having first appeared in March 2019 in a brace of Apollo 11 limited editions and again last year in the £8,250 ‘Silver Snoopy’ model marking 50 years since Nasa astronauts awarded Omega for its services to space exploration.

Now the 3861 has become the powerplant of the official Moonwatch and, says Omega, it earns the Speedmaster ‘Master Chronometer’ certification by passing the eight rigorous tests of the Swiss Federal Institute of Metrology (METAS) covering everything from resistance to magnetism to day-to-day precision. The tests are carried out after the movement has already been chronometer-certified, and the results of each specific watch can be subsequently checked online by owners.

And it’s not only the movement that’s new. The latest Speedmaster has also undergone a gentle redesign using codes from the ST105.012 model used by the Apollo 11 astronauts – so it gets the classic, asymmetrical case and ‘twisted’ strap lugs, a black stepped dial, curved chronograph hands and an aluminium bezel with dot markers in the exact same positions as on Aldrin’s watch.

All new, however, is the five-link, arched bracelet, while the eight variations of the model offer a choice of sapphire crystal or Hesalite glass, fabric or leather straps, glass or metal backs, steel or white gold cases and, on gold models, the option of silver dials.

But calm down, Moonwatch purists – we know only black and steel will do…