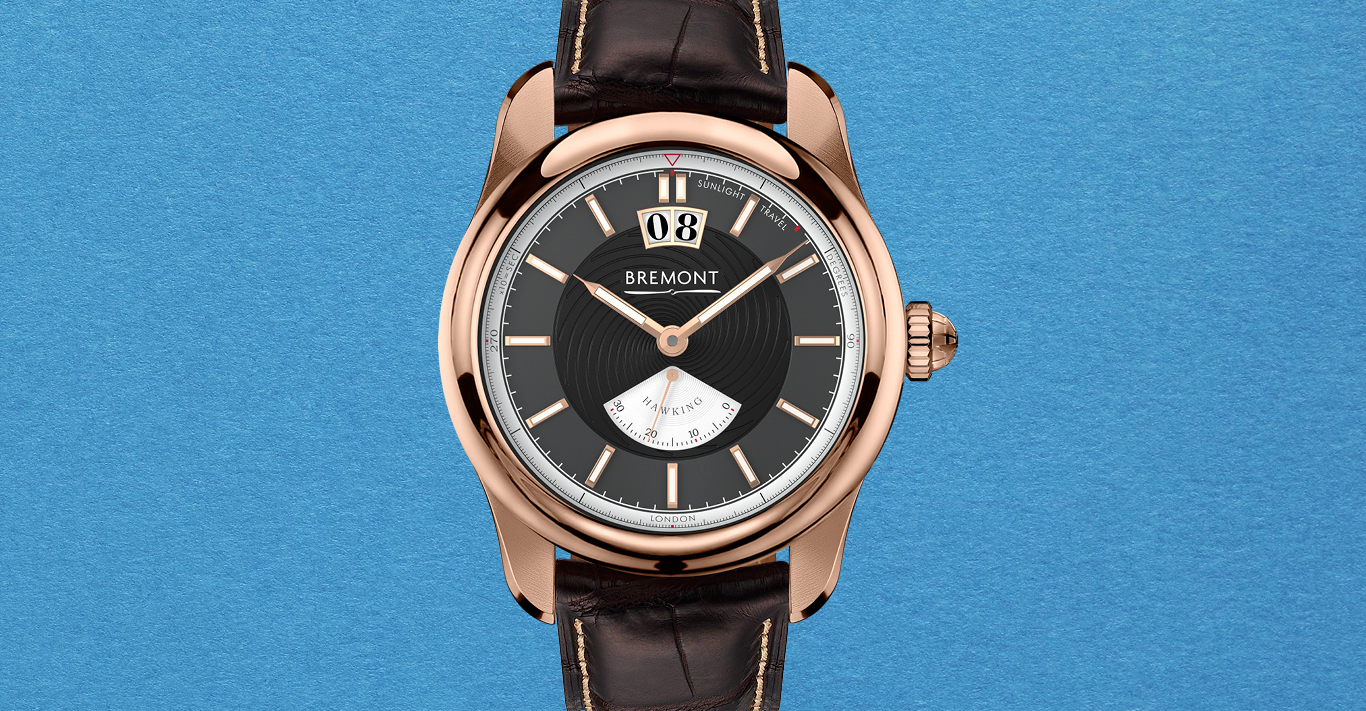 What makes a ‘limited edition’ timepiece truly special? For many watchmakers it could mean a new colourway, bespoke dial or rare use of precious materials. For Bremont, its ‘limited editions’ family offers something even more rarified. This collection of special projects, produced in small numbers, takes inspiration from and incorporates momentous moments from history. The first, the EP120 released in 2008, celebrated the brand’s close association with aviation by being engineered using material from a Spitfire plane. As it releases its 10th piece in the collection, it is once again preserving the past with a special and fitting tribute to the life and work of the remarkable Professor Stephen Hawking.

At the heart of the Bremont Hawking Limited Edition Collection timepieces are four wooden discs inlaid into the back of the watch, made using material taken from the desk at which Hawking contemplated some of his finest works and discoveries. This piece of furniture, thought to date back to the early 20th century, belonged to Hawking’s grandmother, who received it as a gift when she retired as headmistress from the school she founded for girls in Boroughbridge, Yorkshire. ‘My father’s work was primarily theoretical. Nevertheless, he was a person who placed great value on precision craftsmanship and the interplay of design and technology,’ explains Tim Hawking. ‘This antique desk was a most treasured possession, representing both his grandmother’s pioneering commitment to education, and a portal back to happy childhood memories. The Hawking family are delighted that its legacy may live on further now in the Hawking Bremont timepieces.’

This is just one of several significant details that come together to make these timepieces truly exceptional. The sophisticated watch, which features a retrograde seconds hand and grand date, also incorporates some meteorite, symbolising the cosmos which can be seen at the centre of the caseback. Also featured here is an etching of stars from the night sky in Oxford, on 8 January 1942, the date that Hawking was born. Three editions will be produced, in stainless steel with a black dial, rose gold with black dial and white gold with blue dial, each limited to 88 pieces. This number is a reference to 1988, the year in which Hawking’s Brief History of Time was published. The watch’s serial number is printed on paper from original copies of a 1979 seminal research paper co-written with one of Hawking’s longest-serving collaborators, Professor Gary Gibbons. It comes powered by the BE-33AE movement, offering a power reserve of 42 hours.

Notably, Bremont is also releasing a dedicated women’s timepiece, a first for the line. It also marks the first time the watchmaker has ever used diamonds in its collections, which have been inset into the bezel of the 34mm watch, as well as on the index markers. Similarly limited to 88 pieces, it features a dial made entirely from meteorite. Turn the watch over, and the open case back reveals a hand-finished rotor inspired by the swirling of a black hole. It is equipped with the BE-92AV chronometer-rated calibre, which is also intricately decorated to the highest standard.