Time and tide: Omega and the Emirates Team New Zealand

Brummell catches up with Kevin Shoebridge, the COO of Emirates Team New Zealand, holders of the America’s Cup, to talk training, boat design and Omega watches 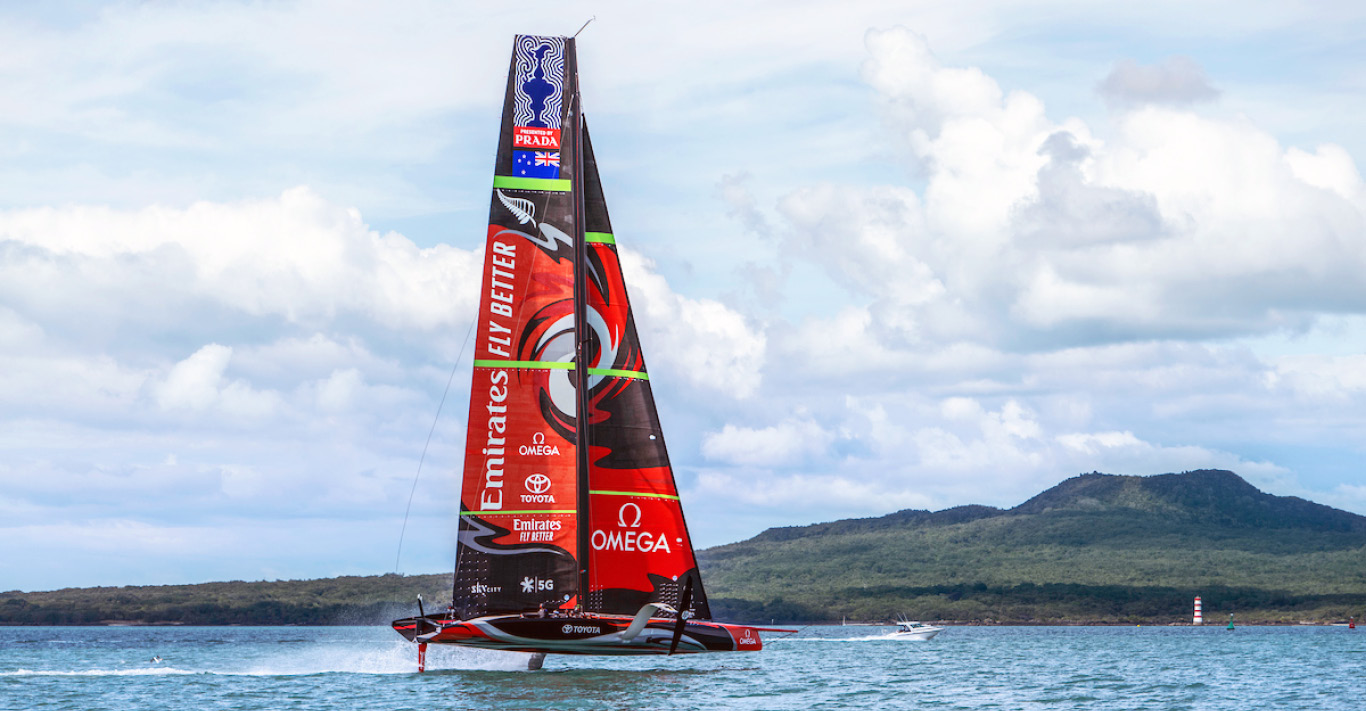 Kevin Shoebridge is the COO of Emirates Team New Zealand, the Kiwi holders of the America’s Cup, the oldest trophy in international sport (dating back to 1851). He is one of the few people in sailing to have made the transition from competitor to manager, and, remarkably, has been involved with Team New Zealand in one or other of those capacities each time it has won the America’s Cup – in 1995, 2000 and, most recently, in 2017. He is currently in Auckland, New Zealand, with the team, preparing for the 36th edition of the America’s Cup, which takes place next March. Plans have been disrupted by COVID-19, so whereas the schedule originally would have seen the competing teams testing their boats against each other in regattas this year – the Christmas Cup and World Series – now they are all training in isolation and will not get to face each other until the end of the year, which will be very close to the start of the competition in March 2021. That leaves little time for improvements and adjustments.

‘The nice thing in those regattas that we should have had is that with a new class of boat you get to see what they are like on a race course; and it lets the designers see what the other teams are doing,’ explains Shoebridge. However, he says that the current situation adds a whole new level of intrigue. ‘In a lot of ways its really exciting. In the past, you’d get a feel for which teams are going well. But now we don’t really know, and all the teams have committed to following a particular route in terms of boat design. Let’s hope we’ve chosen the right one!’

Indeed, Shoebridge explains that ‘the big components, the hull and the mast are done,’ and how the hydrofoils that run under the water take months to design and three months of construction, so really by the time you race it’s only possible to fine tune.

However, it’s not exactly true to say that the teams have no idea of each other’s progress. Shoebridge explains that out on the water in Auckland today the New Zealand boat had three chase boats following it. These are from rival teams trying to get information on their competitors. ‘Recon is so important,’ says Shoebridge. ‘We’re doing the same.’ There are rules about this now and it is part of the build-up to the competition and an essential element of preparation. ‘It’s very important,’ says Shoebridge. ‘It would be foolish to believe that your team is doing everything right. We have pretty strict rules now; but back in the ‘80s and ‘90s we didn’t and there was all sorts going on – cameras underwater and eavesdropping etc!’ 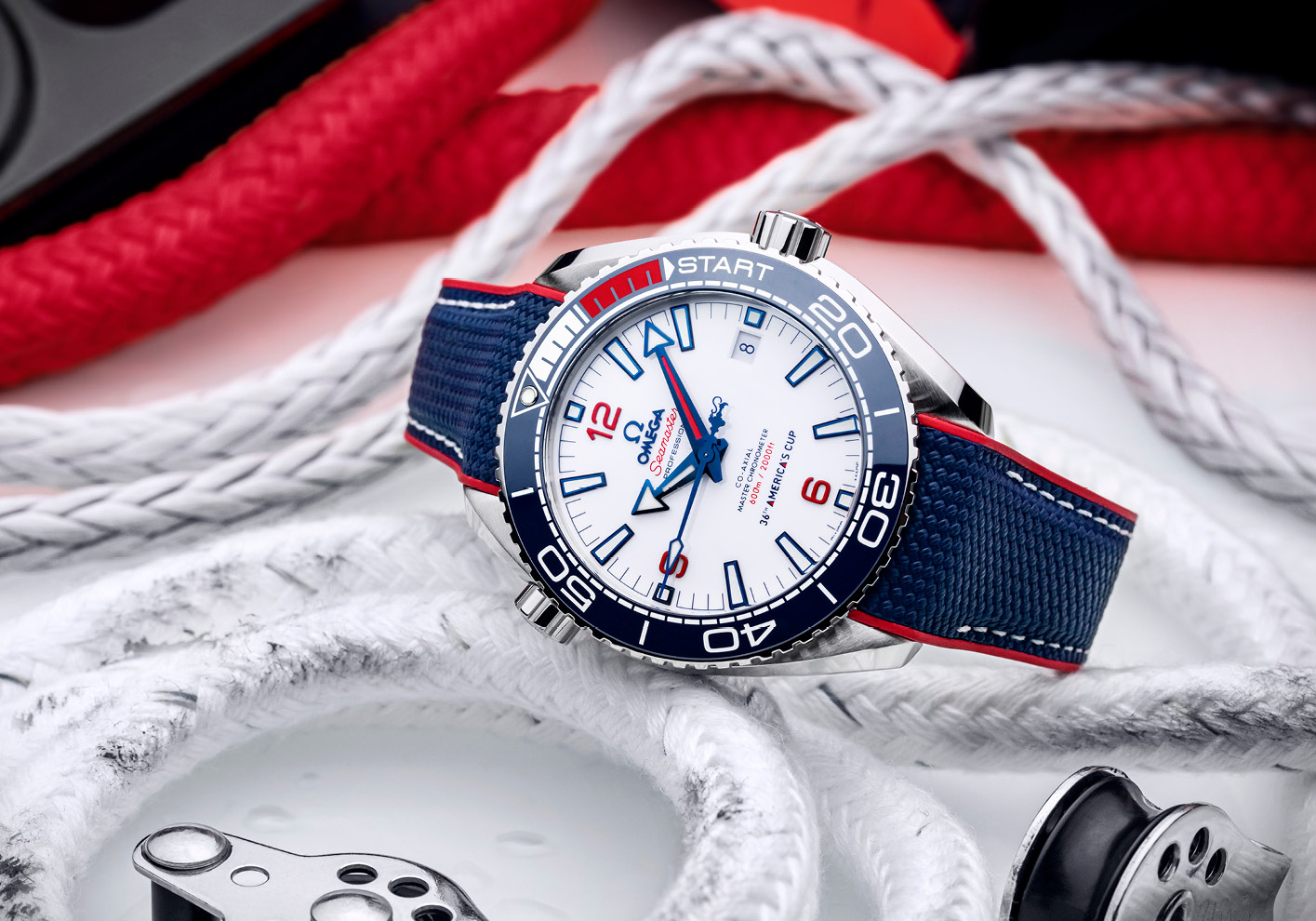 It’s because of this type of information gathering that although there will be no racing between the teams until December, a consensus has developed as to the design of the new class of boat that will be competing next March. As the most recent winners, Emirates Team New Zealand not only get home advantage and host the Cup in their waters, they also get to set the rules for the next competition in conjunction with the first challenging team (the Challenger of Record), Luna Rossa. Here they decided to make a couple of significant changes. First, they decreed that the 36th edition would use monohull boats again, after a couple of America’s Cups where the specification was for a catamaran. Then they also outlawed the use of pedal power – an innovation that arguably helped them to their victory last time, when instead of the traditional arm grinding that their competitors were using to generate hydraulic fluid to run the boat’s systems, they instead installed on-board cycle stations, so team members could use their leg muscles to do the job instead.

So why ditch the “cyclors” (sailor plus cyclist, geddit?)? ‘It was a nice innovation that we came up with last time, but this time in our discussions with the Challenger of Record [Luna Rossa], when we were writing the rules we decided to close it down and go back to traditional grinding.’ There is a sense when talking to Shoebridge that his team really wanted this next America’s Cup to return to a more traditional-looking competition. The switch back to monohull can be seen as coming from a similar place. Although these foiling boats have little in common with the craft that used to race in the competition before the advent of hydrofoil technology.

‘Interestingly there was a push from a lot of the competitors to stay with the same class [of catamaran],’ admits Shoebridge. ‘But we had a strong desire to go back to monohulls. A lot of that’s based on the preference of the yachtsmen – 90% sail monohulls and only 10% sail cats [catamarans]. But also we thought it would be really neat to keep technology at the forefront and give a monohull the technological boost that the sailing cats had had. Our designers immediately came up with eight to ten variations for what a monohull could be, which varied from conservative old-style sail boats to these foiling “moth type” monohulls that we’ve ended up adopting.’ He’s happy to report that the decision to revert to monohulls has gone down well. ‘We’ve had nothing but positive feedback about the boats, particularly from the teams that are sailing them.’

Because of the constraints on the design of the boats that will make up what is called the AC75 class of vessels that will race in March, and because of the constant inter-monitoring of the teams, the end results in terms of design for each competitor could begin to look very similar. The technology too, is similar, in that all are aiming to spend as much time as far out of the water as possible, elevated on their hydrofoils to reduce the drag of the water and hence “fly” across the sea’s surface. This level of tech wizardry and how it has developed over the years is, says Shoebridge, one of the things that makes the competition so compelling.

‘There’s no question that the America’s Cup boats of 20 or 30 years ago were leading in tech. But it’s taken a quantum jump since San Francisco when the foiling boats appeared.’ That was in 2013, when Emirates Team New Zealand gave away a commanding lead in the final and lost to Team USA 9-8 in what was an extraordinary sporting comeback. 2013 was also the first year when the boats incorporated hydrofoiling technology. 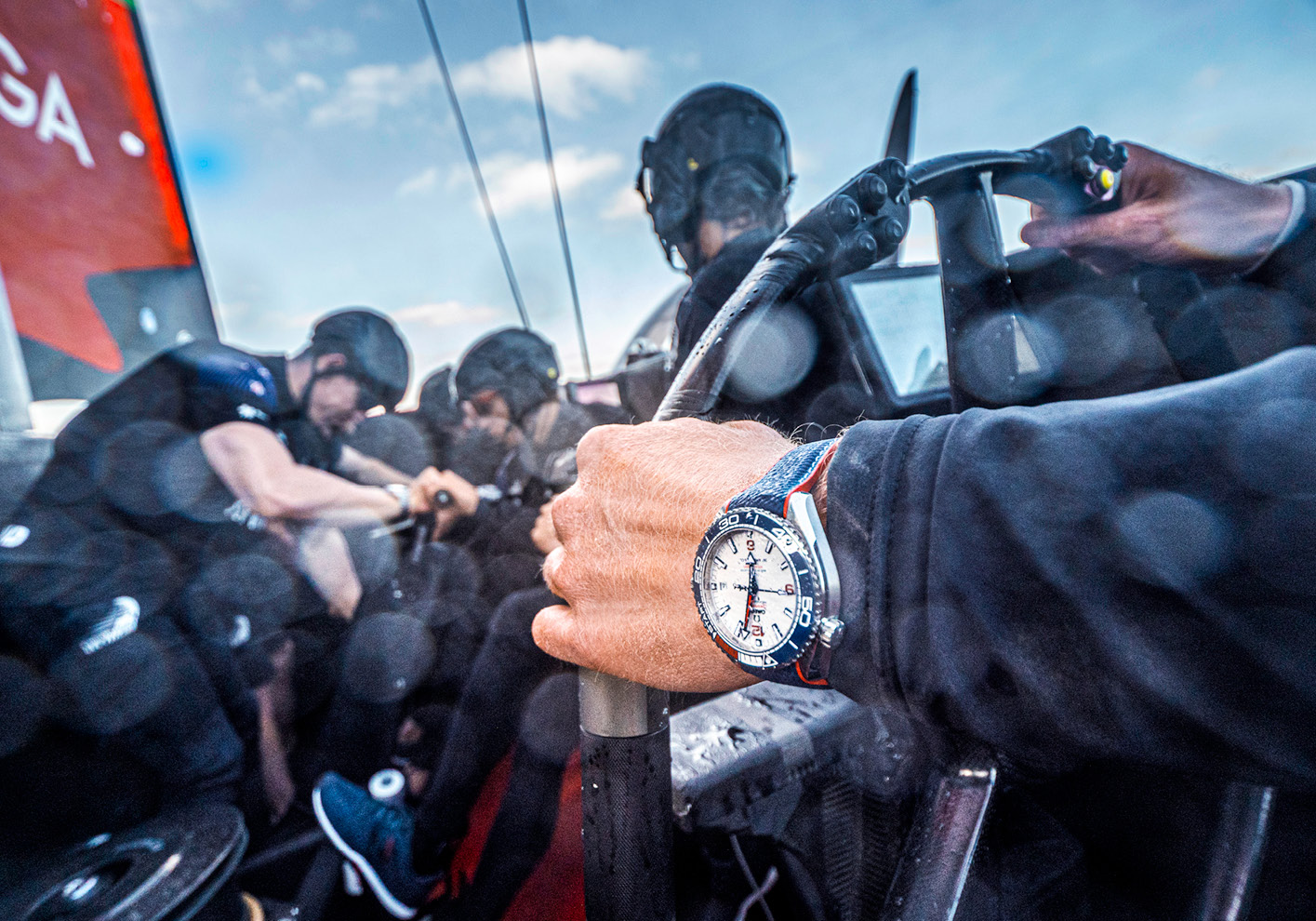 The New Zealanders got revenge at the next edition, beating the Americans 7-1 in Bermuda in 2017, which means Shoebridge’s men are now defending champions. I wonder whether because of the advances in boat design, these guys now need to be super-sailors?

‘The yachtsmen of 30 years ago were highly skilled,’ says Shoebridge, ‘but they were of a different type. These new boats require a different type of sportsman. Everything happens at such speed now, it does feel like a different sport at times. That’s what makes it so attractive: you’ve seen it morph into a different beast.’

While a lot of the skills required might be transferable from sailing a regular yacht, this is another level altogether, says Shoebridge. And compared to America’s Cups of old, the competition is now a lot more physical; it’s all about high performance. Gone are the days when you’d have a tactician, navigator and strategist. ‘All of those decisions are now made by Pete [Burling], our helmsman, who’s hanging on to the steering wheel. It’s just his call, as we’re moving round the track so quickly.’

Peter Burling, who piloted the team to victory three years ago in Bermuda is, says Shoebridge, emblematic of how the sport has evolved. ‘Pete’s a good example. Today you have to have people on board that are not only yachtsmen but also have a very detailed understanding of the science and physics.’ This is true not only when actually sailing the boat in competition, but also in the build-up. ‘You can’t design a boat with designers alone, you need practical feedback from the sailors. Design team and sailing team – the lines are blurred between the two.’

So at present the sailors are constantly feeding the designers information and data so the boats can be tweaked. But interestingly, they are also doing precisely the same, says Shoebridge, with Omega, who is the official timekeeper of the competition and sponsor of Emirates Team New Zealand. In fact, Omega has been involved with the Kiwis since 1995, and today uses the team to develop special-edition America’s Cup watches. 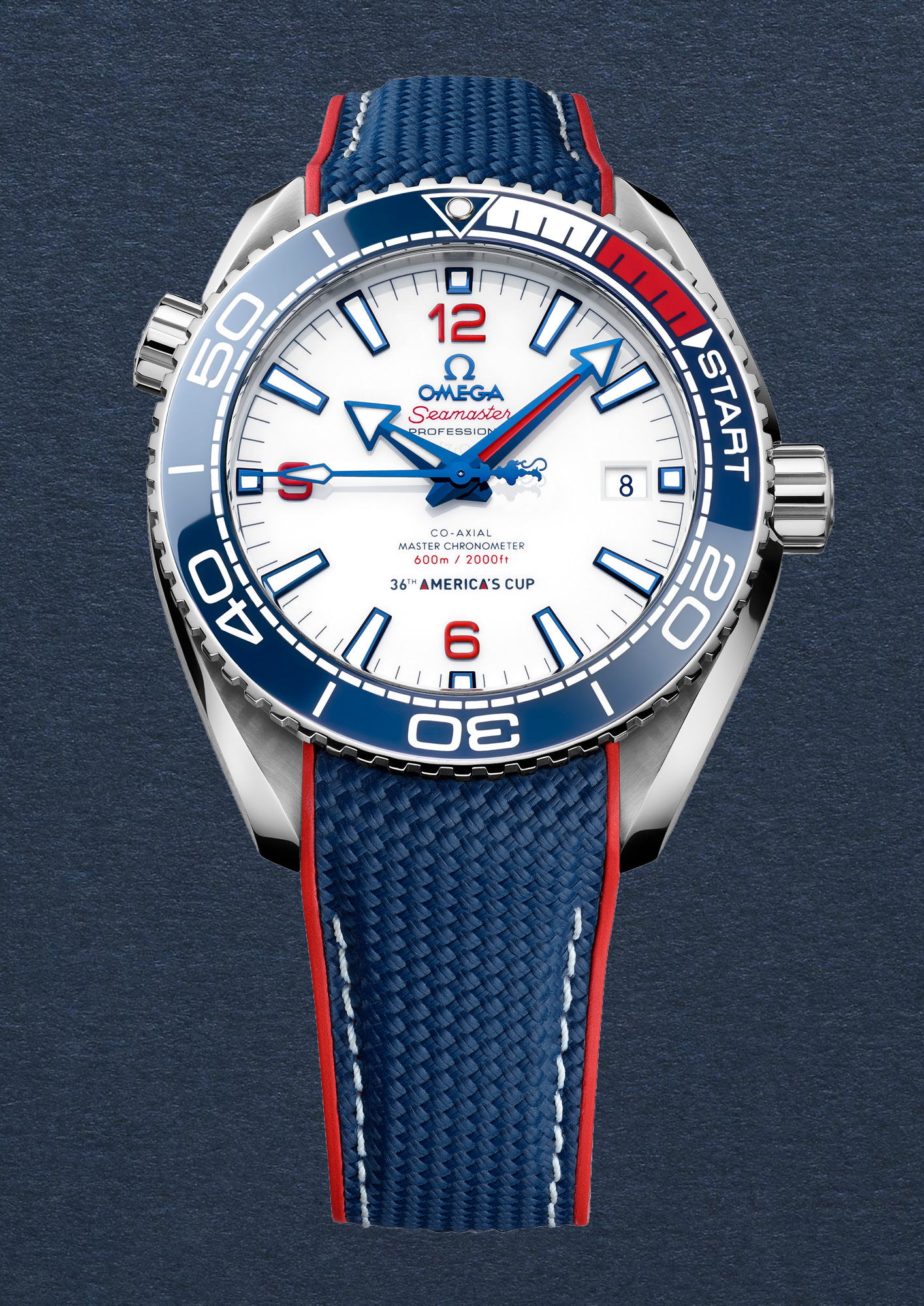 ‘We take the new watches out and feed back. We communicate backwards and forwards – various ideas. What do our guys that are actually on the boat feel would be good functions? What would work well? Obviously we’re not the watchmakers, we’re the sailors.’ The current result is the Omega Seamaster Planet Ocean 36th America’s Cup Limited Edition. The 43.5mm timepiece is crafted from stainless steel, comes on a rubber strap, features the red, white and blue palette of the event’s logo and is limited to just 2,021 pieces.

‘The watch is beautiful,’ says Shoebridge. And though, practically, a mechanical watch is only ever going to be a backup for a sailor these days, it is symbolic, he says, of the importance of timing. ‘Everything is about timing in this competition. I was thinking about that today as we were practising a series of starts. It’s totally about precision and hitting the line at speed at exactly the right time. Everything about these boats is about timing. As is the whole campaign over three years – we’re constantly running out of time; every decision needs to be made at the right time, and you’re always up against it.’

Be that as it may, Shoebridge sounds pretty relaxed. But then Emirates Team New Zealand has a quiet confidence that stems from the strong culture that has been built around the squad over so many years. ‘We’re lucky because this team has been around for 35 years. Although it’s changed, of course, but a lot of its culture hasn’t. We think it’s a particularly interesting and enjoyable place to work. And we put a huge amount of effort in finding the right people, making sure the team works well. Everyone has a voice and an opportunity to contribute and be involved at a high level. We start with a nucleus and then that group itself makes the decisions. We do it as a collective group, it’s not just down to one person. Somehow you get dragged along in the rush – it’s a strong team, so it’s not an option not to get involved. Now we are about 155 people, and we are building our own boats in-house, so we have 45 boat builders. But we keep the core team and its philosophy the same.’

I tell Shoebridge that the closest analogy I can think of is those other New Zealand sporting legends, the All Blacks. But though the COO chuckles appreciatively at the idea, he’s taking nothing for granted. He says that his charges ‘are in a really good spot – we feel comfortable with where we are at the moment and know what we have to do over the next six months’. Nevertheless, it’s going to be tough: ‘Make no mistake. The level of opposition is very high, all the challengers are strong. It’s going to be an amazing spectacle.’ 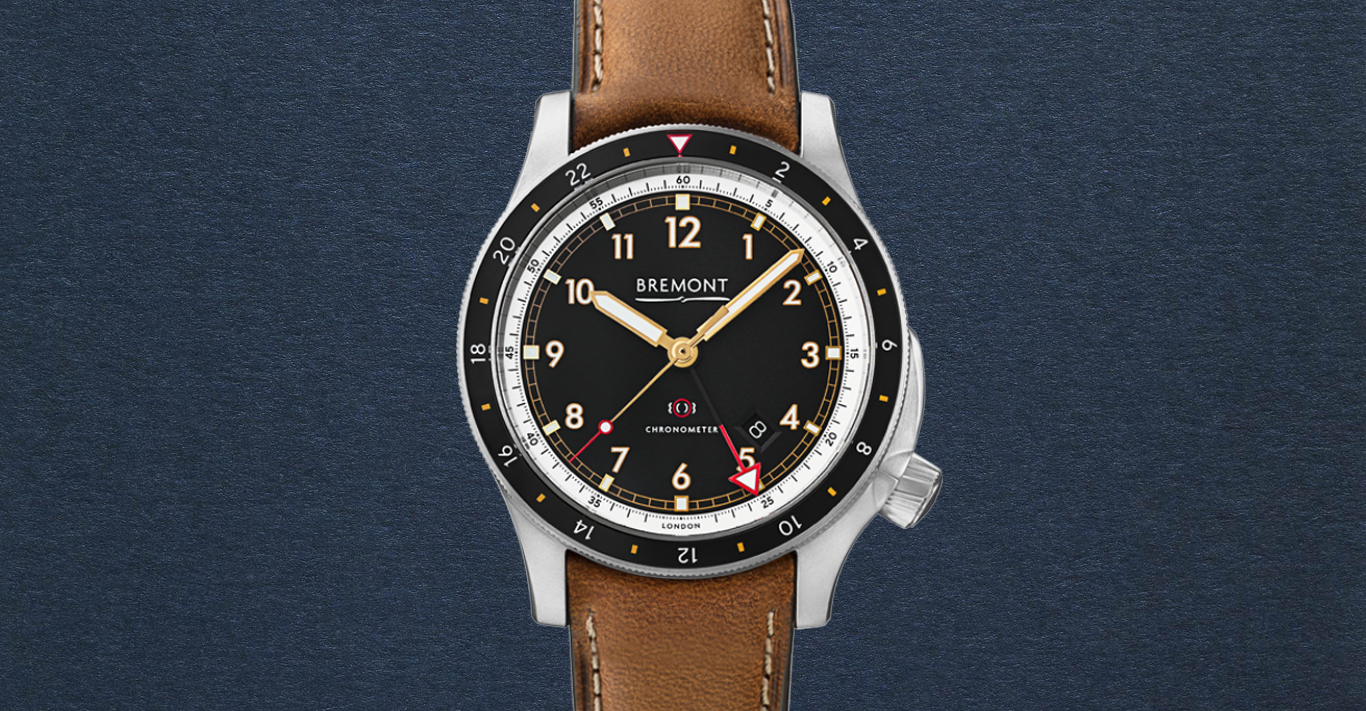 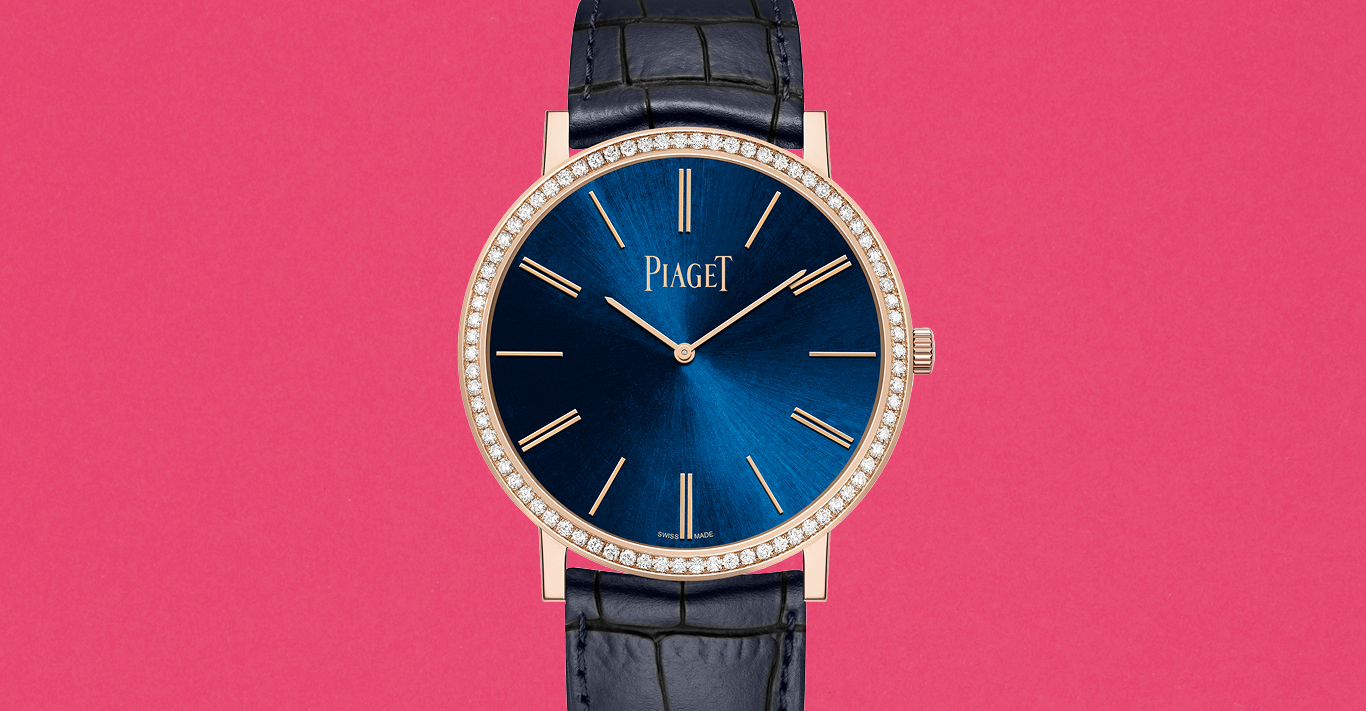 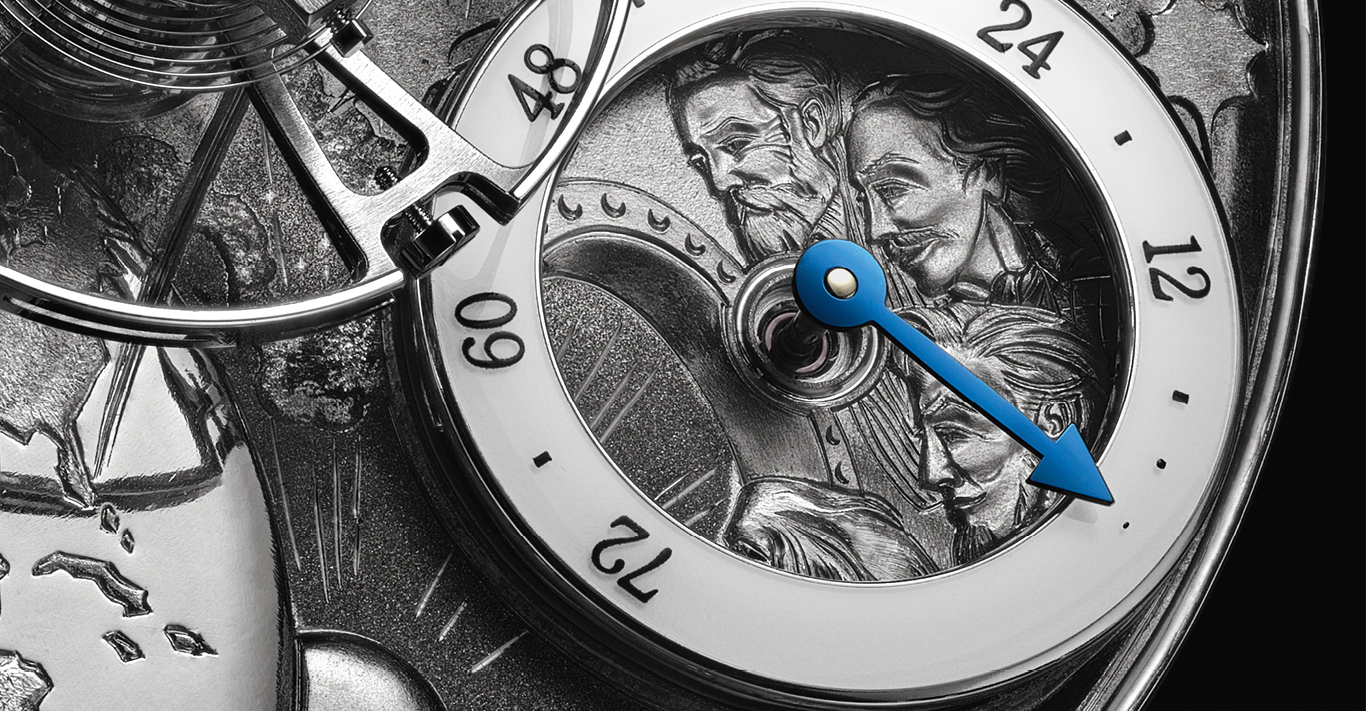