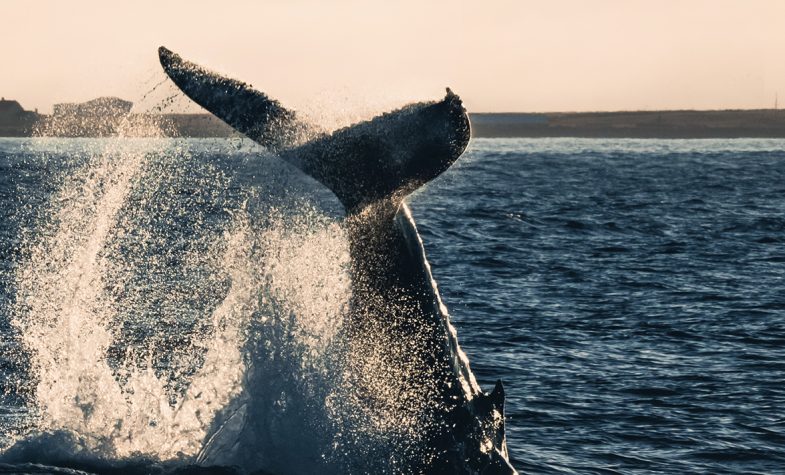 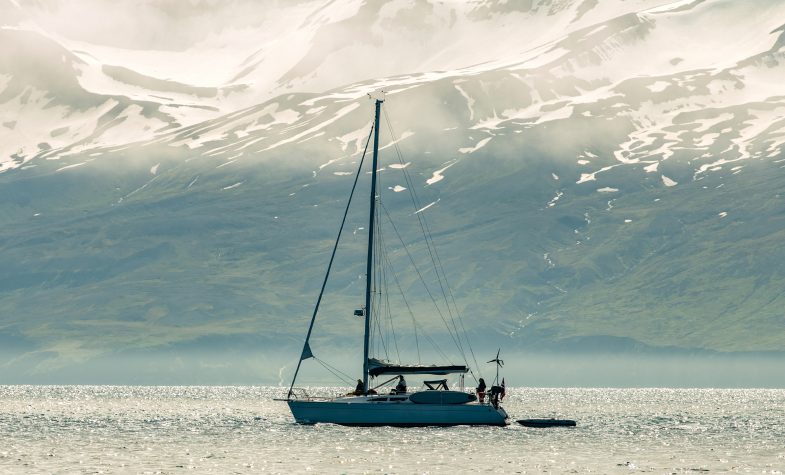 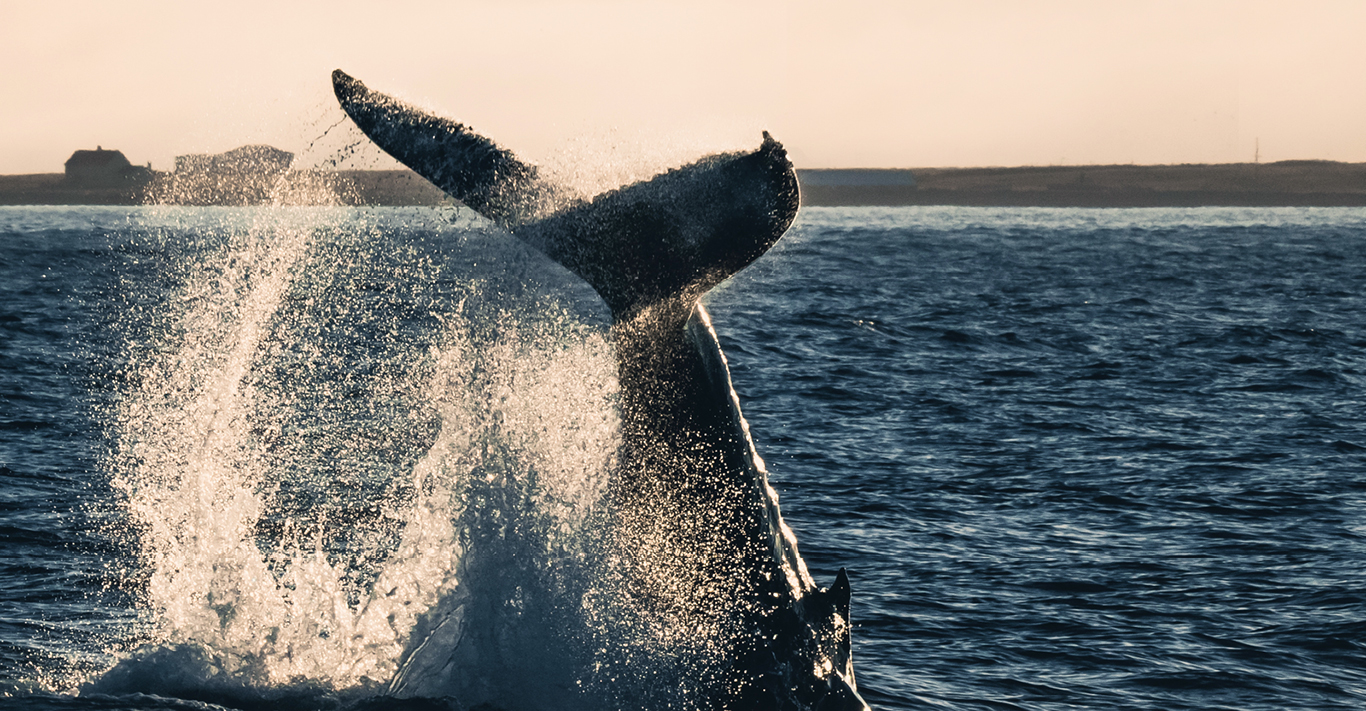 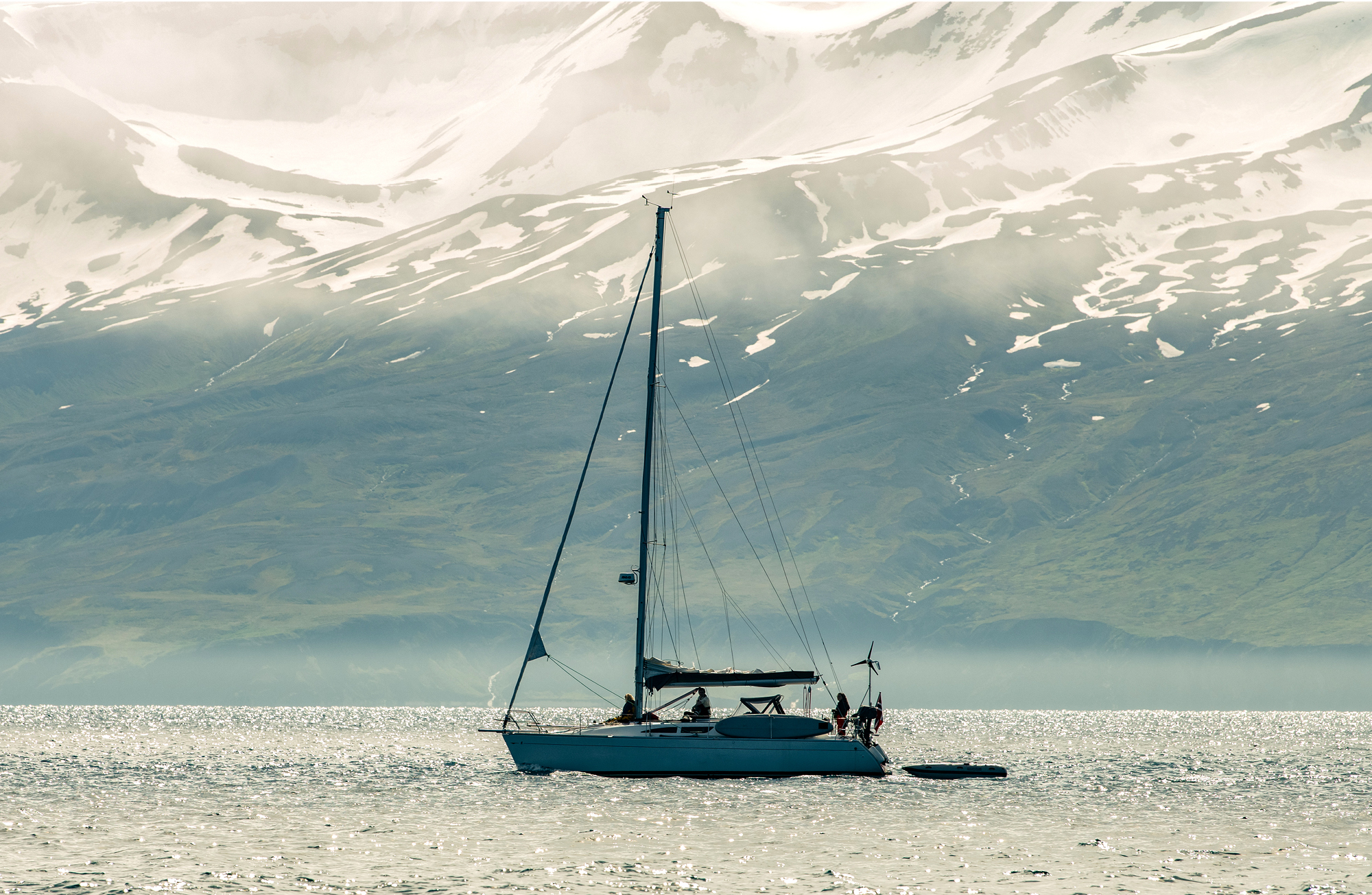 An endless succession of waves slam against the hull, launching our bodies across the cockpit. The sun, still low on the horizon, teases, offering no warmth. And at the helm, captain Andreas B Heide guides us stoically, unaffected by the Arctic freeze. Suddenly, his expression changes. ‘Whales,’ he cries. ‘Humpback whales.’ Ahead, the blow of a large female humpback rockets skywards before she submerges once again, revealing the flash of her flukes as she dives deep to feed. I’m with the Arctic Whale team aboard the expedition boat Barba in Skjálfandi bay near Húsavík on the northern tip of Iceland, and I’ve just seen my first whale.

Arctic Whale is the brainchild of Norwegian marine biologist, adventurer and sailor Heide, and impact manager Sandra C Ness. Formed in late 2018, its premise is simple: to highlight the threat of plastic to our oceans, whale populations and wider marine life. ‘The Arctic Whale project is about using whales as marine ambassadors, and we have a special focus on marine plastic pollution,’ says Heide. ‘There’s so much plastic in the ocean. There’s the macro-plastic, which gets eaten and animals die, but with erosion, other plastics become smaller and smaller to the point that you can’t see them anymore. It’s just a soup of plastic.’ Indeed, it is well documented that approximately 8 million metric tons of plastic waste makes its way into our oceans each year, of which 236,000 tons are microplastics.

And while the effect of macroplastics, such as bags, straws and defunct fishing equipment, causes the deaths of 100,000 marine mammals and turtles, as well as more than 1 million sea birds per year, the effect of microplastics, those smaller than a sesame seed, remain alarmingly unknown. ‘What happens when it stays in the ocean?’ asks Heide. ‘Well, no one knows how this plastic affects the marine environment.’ Travelling from Stavanger, Norway, the team sailed to Húsavík, Iceland, via both the Shetland and Faroe Islands in Heide’s 37ft expedition-prepped Jeanneau sailing yacht, and over the course of the two-month expedition, they set out to shed light on the microplastic epidemic in a number of ways.

The first was through the use of a manta trawl. This is a specialist tool that skims the top 30cm of the ocean surface, which is where 70-80 per cent of all plastic lies. The second was through blubber sampling, where a small dart is fired into the whale to retrieve a small section of flesh that can be tested under an electron microscope. Heide notes this would feel like no more than a pinprick for us. And the final element is blow sampling, where a drone carrying a petri-dish is used to fly above a breaching whale to collect its blow (breath). Through the remnants of mucus that are expelled, microplastic pollutants can then be tested at a cellular level.

Over the past few years, we’ve witnessed an immense rise in the collective effort to raise awareness about plastic pollution and help promote a healthier ocean ecosystem. And while the outlook is still bleak, change is finally afoot through the initiatives of governments, business, companies and individuals. This is where watchmaker Breitling comes in, through its partnership with the non-profit environmental advocacy group, Ocean Conservancy. Together they launched the Superocean Heritage Ocean Conservancy Limited Edition watch.

The Breitling Caliber 13-powered 44mm Superocean Heritage features a caseback that has been engraved with the Ocean Conservancy logo and is presented on a Nato strap made from Econyl, a fabric woven from recycled waste Nylon, from which most of the world’s fishing nets are made. And while only 1,000 pieces will be produced, this partnership is far more about the message than the watch itself. ‘I have always been an environmentalist,’ says Breitling’s CEO Georges Kern. ‘I, with Breitling, can’t change the world, but I have one conviction, which is that everybody should do the maximum he or she can do within his or her sphere of influence.’ For the launch of the Limited Edition, Kern insisted on an immense beach clean in Bali with Breitling’s high-profile surfing ambassador Kelly Slater. ‘Plastic is one of the biggest threats to our oceans,’ Kern adds. ‘This is why it’s important to have NGOs like Ocean Conservancy and brands like Breitling contributing. We will bring many more of these initiatives.’

I join the Arctic Whale team in Sørvágur on the Faroe Islands to sail across the North Atlantic to Iceland to begin the search for blue and humpback whales. As we depart the Faroe Islands after a few days spent searching for orcas, an immense pod of pilot whales follows Barba as we race across the ocean. Heide tells me that it’s likely they have never seen a sailing boat before and are following us out of curiosity. Below deck, Fabrice Schnöller, an acoustic engineer and pioneer in the field of cetacean communication, cries with excitement; he can hear the ‘click’ of the pilot whales through the hull. ‘They can hear us speaking,’ he says. ‘They’re communicating with us.’ In this moment I understand why Heide uses whales as marine ambassadors. There’s something transcendental about this moment; the pilot whales mere inches away from us cease to be animals; they are conscious beings, capable of understanding more than we could possibly know.

With land in sight, we make our way to the Skjálfandi bay, the whale capital of Iceland. Here, the confluence of three major currents, coupled with the nutrient-rich meltwater from the surrounding land, creates a hotspot for marine life. Humpback, blue, fin, minke, sei, bottlenose, sperm, killer and pilot whales all feed here alongside white-beaked dolphins and harbour porpoise, making it an area of immense research importance. And like Breitling and Ocean Conservancy, the key to pioneering change is through collaboration and partnerships. Aided by Dr Marianne H Rasmussen, a whale research professor at the University of Iceland, Tom Grove, a PhD student at the University of Edinburgh, who leads the blow sampling, and Jessica Emily Roos, a student studying the effects of nanoplastics on marine organisms at the University of Oslo, alongside many others, the Arctic Whale team are able to expand their knowledge base for the largest possible collection of information, which is being processed and will be revealed early next year.

While Arctic Whale and Breitling’s Ocean Conservancy partnership are just two small elements helping to conserve our oceans and their inhabitants, it further demonstrates the shift in the consensus of the global community. ‘I believe that big change comes from many people taking small steps and pushing things in the right direction,’ Heide says. ‘When millions start taking small steps, that’s when we’ll see change.’ 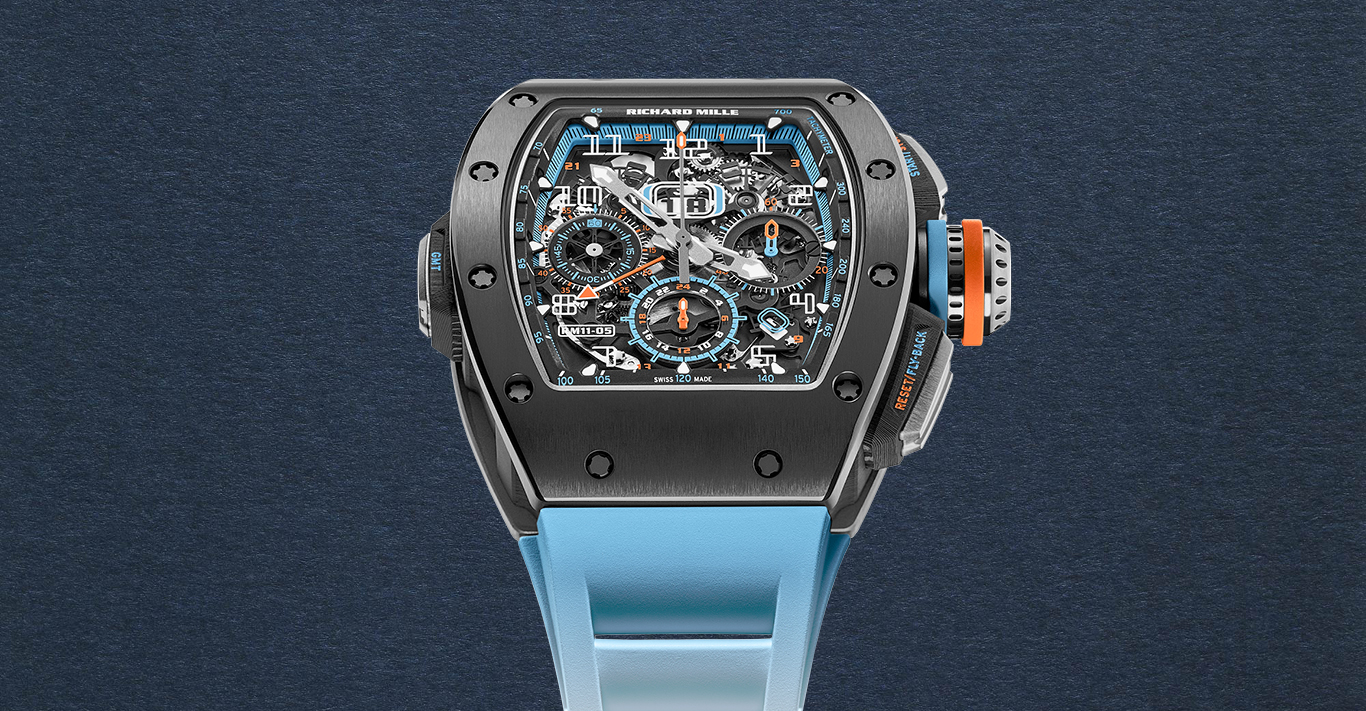