With its vintage good looks, remapped engine and a satisfying roar of intent, the 1600 is the perfect weekend cruiser 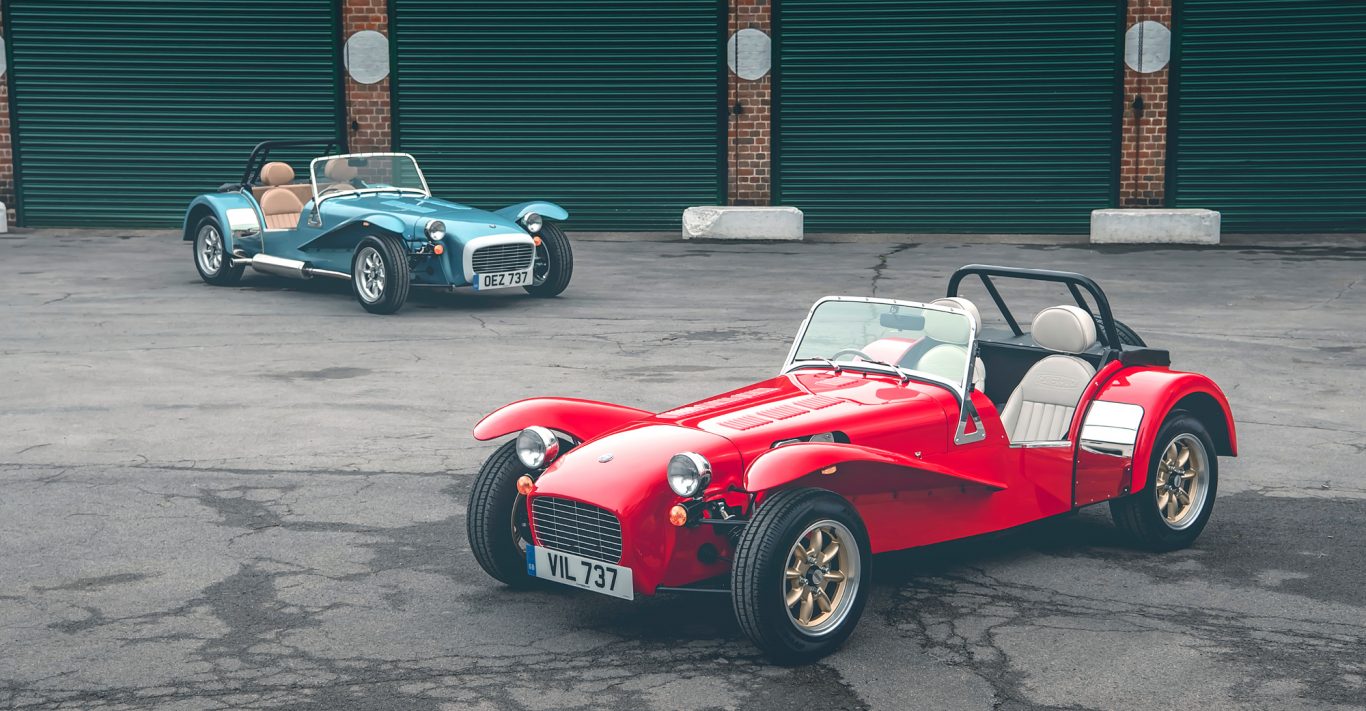 Even if you’re joined at the hip with your SUV or you can’t get enough of your man-about-town Merc, if you’re ever given the chance to whizz around in a Caterham for the weekend, we’d put money on the answer being a resounding yes.

Requiring the rights, in 1973, to build the Seven from Colin Chapman – who originally designed the kit car in 1957 – Caterham has upheld the mantra of simplicity, lightness and a fun driving experience for more than 60 years.

Offering the full vintage experience, albeit without the lengthy waits for roadside assistance on the hard shoulder of the M25, the Caterham Super Seven 1600 takes inspiration from the earliest Sevens and is a driving sensation that offers both style and substance.

With a tubular steel chassis, Caterhams offer the lightest vehicles on four wheels, a little over 500kg each, and the Super Seven 1600 is the third retro instalment for the marque after the success of the sell-out Sprint and Supersprint models. Combining lightness and great handling with a remapped 1.6-litre Ford Sigma-powered engine – complete with two K&N filters poking up from the bonnet, which mimic the look of carburettors and enable an improved airflow – and a performance-ready road-worthy configuration, it can certainly turn heads. 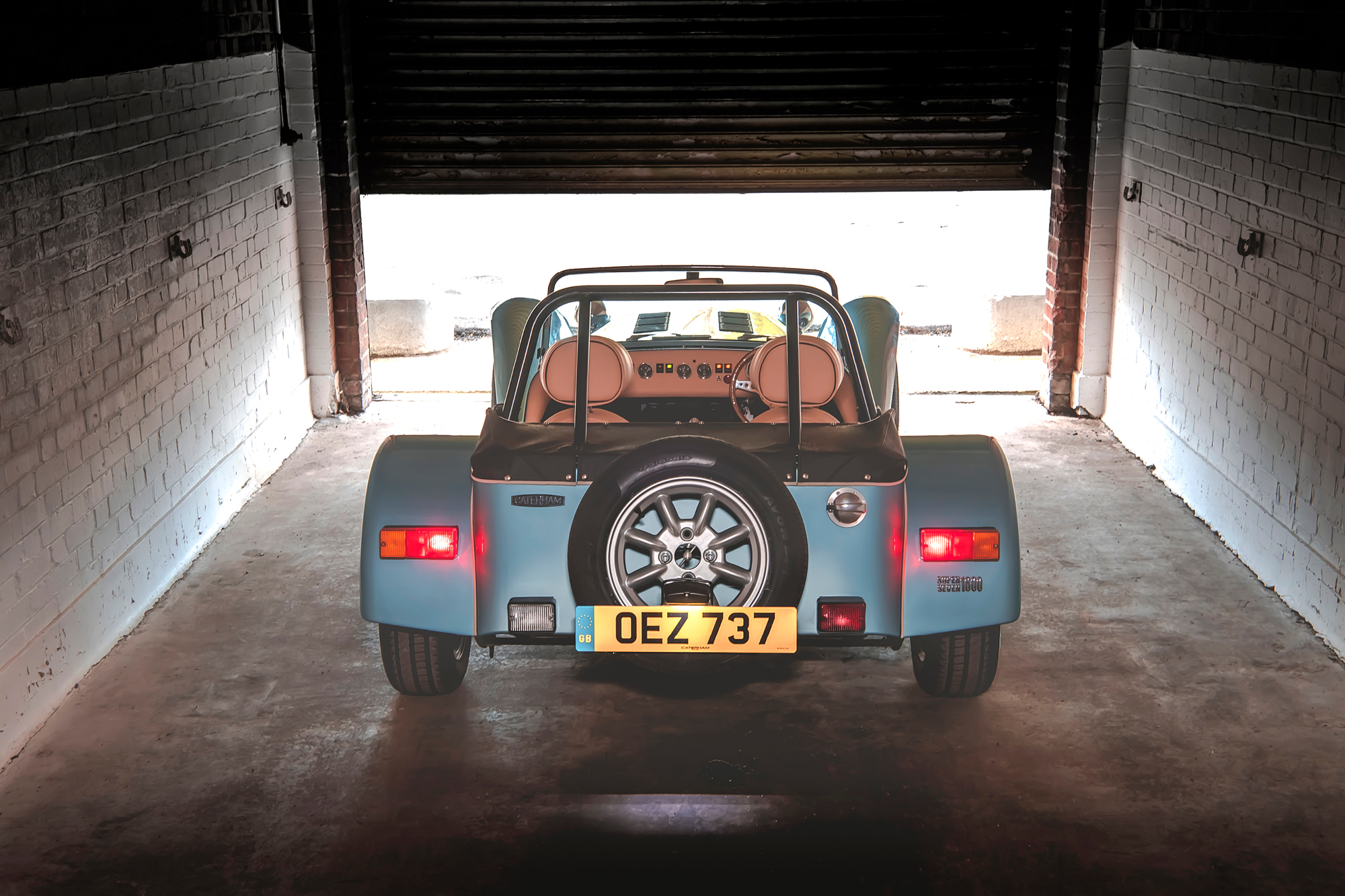 Roaring out from 0-60mph in just five seconds, it’s a great ride for those out to make the most of a weekend whizz-about. The fun is greatly enhanced by the low boat-like cabin and coherent sensations placing the fact that you’re intimately close to the tarmac at the forefront of your awareness. Thanks to its slimline tyres, and rugged suspension, the 1600 continuously sends positive vibrations up to the steering wheel allowing for ease of control, whether it’s speeding up the motorway or navigating twisting country back lanes. That said, the turning circle is, as expected, rather limited and on a sunny afternoon outside the county local, we put on a slick three-point turn show for happy onlookers as they hurled unsuspecting questions at us about the year of the car. For the untrained eye, Caterham’s attempt to take the marque back to its roots with the 1600 has certainly paid off here. 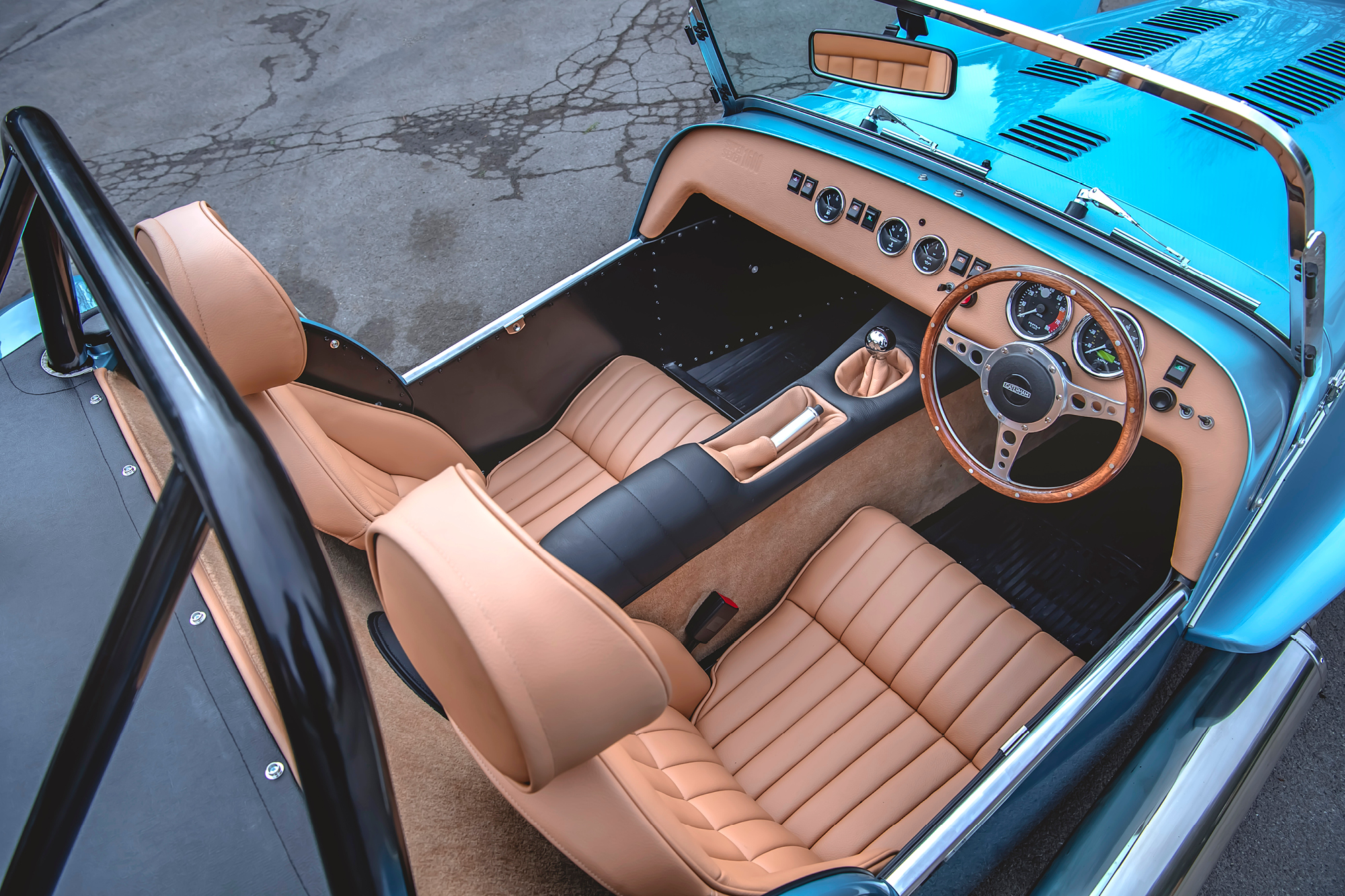 With two compact seats, and a tiny rear compartment, there is no room for your weekly shop, but there’s enough room for a compact weekend holdall and, once you’ve settled into the soft padded leather seats and squeezed in behind the wood-rimmed Moto-Lita steering wheel, there’s leg room for days. On dry days, you can happily peel back the leather pop-on roof and side windows (which neatly store away next to your holdall in the rear) and – protected by the road-friendly windscreen – embrace all the sensations of being out on the open road. Long hair does benefit from a vintage silk scarf, or a hat to stop it flying around with abandon, but this is still preferable to an amble with the roof firmly in place, where the compactness of the cabin suddenly becomes glaringly apparent. Use for rain emergencies only.

Having recently launched the Seven 170 – the lightest ever production car and the first new model since Caterham’s acquisition by Japan-based automotive group, VT Holdings – Caterham is making track and road driving fun and accessible to all. And on 30 September, to celebrate its lightness, Caterham will be launching a pop-up store 450ft in the air, within the British Airways i360 pod in Brighton and taking on the challenge of assembling a Seven 170 from scratch in a day.

The Seven 170 starts at £22,990, a little cheaper than the 1600’s £33,495 price tag but it’s still accessible considering the quality of the driving experience and the fact that the 1600 comes with the option of eight exclusive paint finishes, a spare wheel and a carrier.

Ticking all the boxes, the 1600 the ideal second car. Featuring polished finishes not found on any other model, including the polished windscreen, retro front grille, chromed dials and headlight surrounds, alongside the trademark slick lines, buttery leather seats, carpet panels and a debonair walnut dashboard housing Smiths dials, it’s made for a bit of show-pony weekend fun, away from the comfort and practicality of your regular four-wheeler. And if your city pad can’t accommodate car number two, then you can always get your shopping delivered instead. Because if it’s a weekend cruiser you’re looking for, you can’t go wrong with the 1600. It’s got retro good looks, a snug yet luxurious interior and who can’t resist that 70s-inspired whir of intent from the 135bhp engine the moment you fire her up, ready to coast into the sunset down the A roads of Britain? 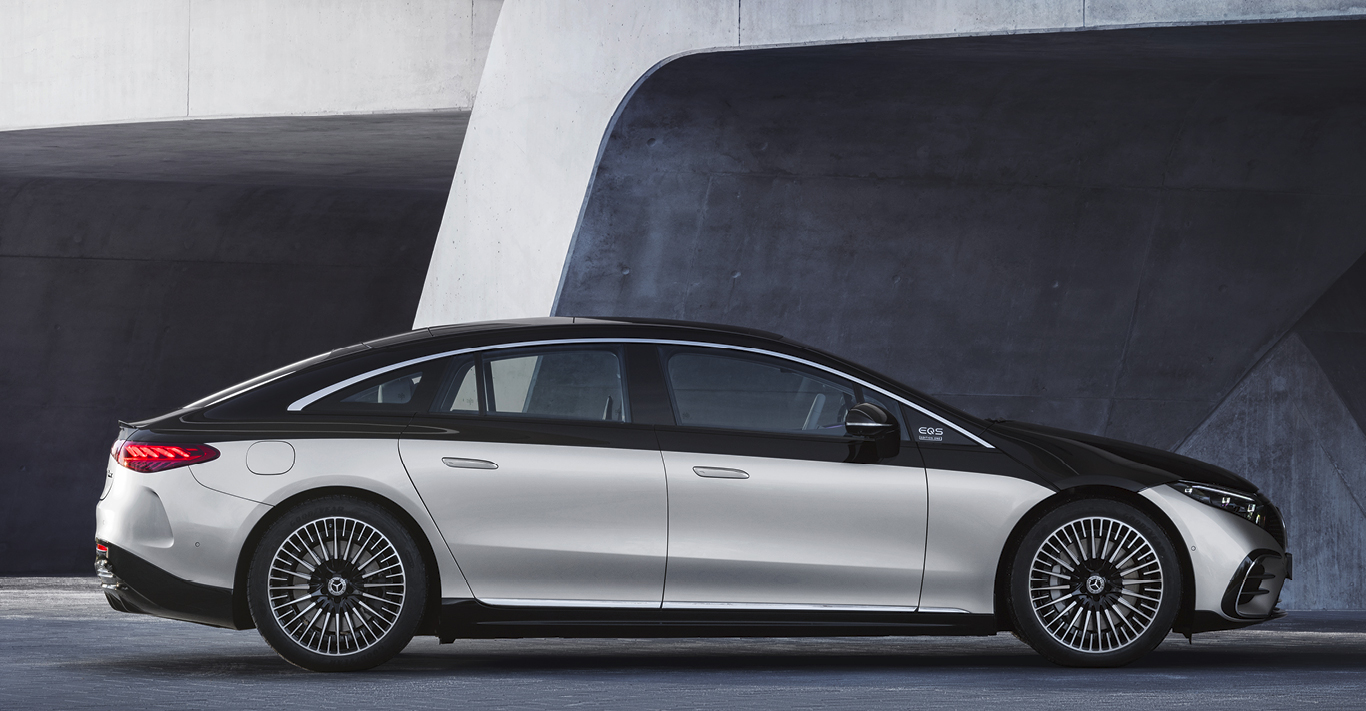 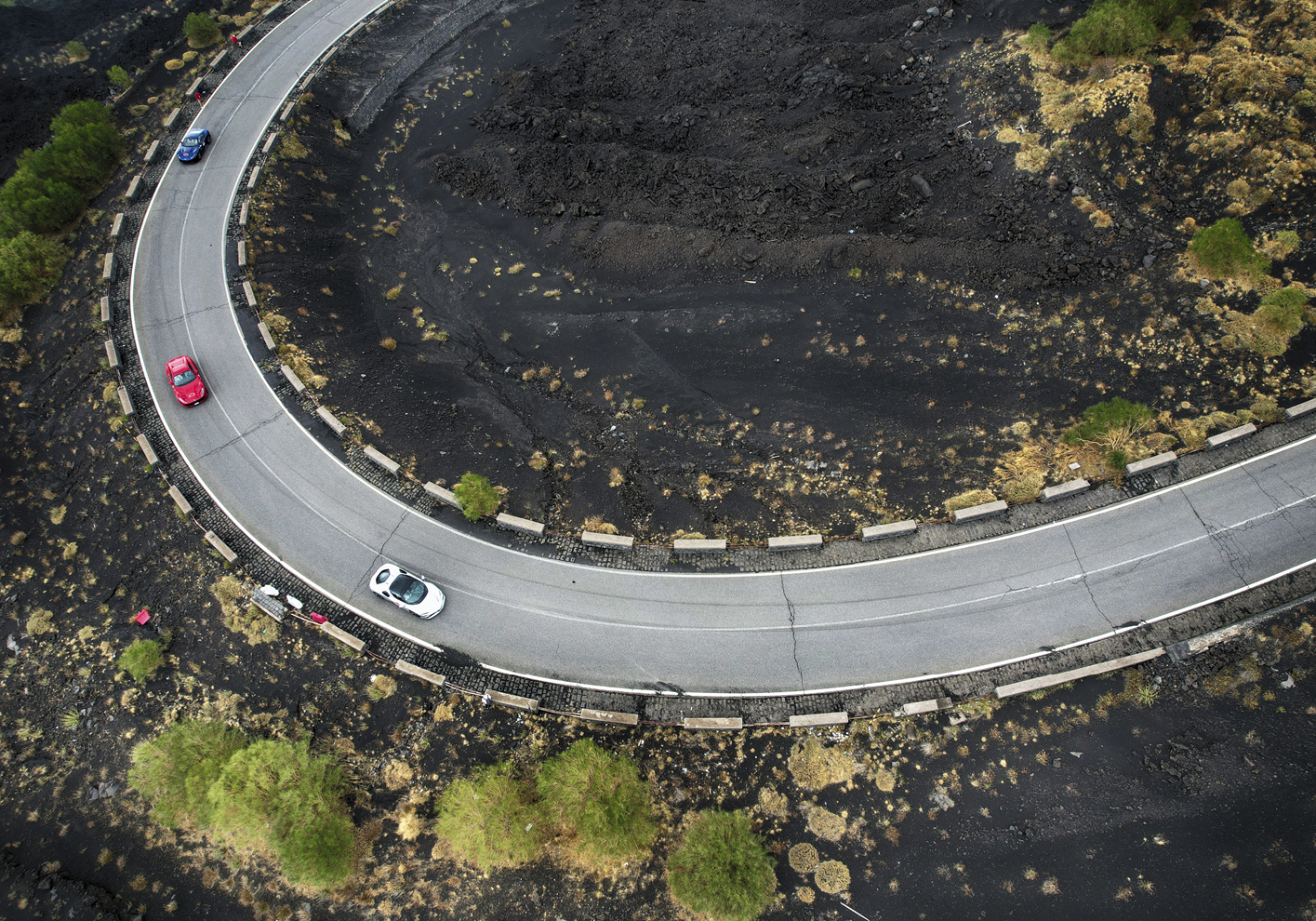 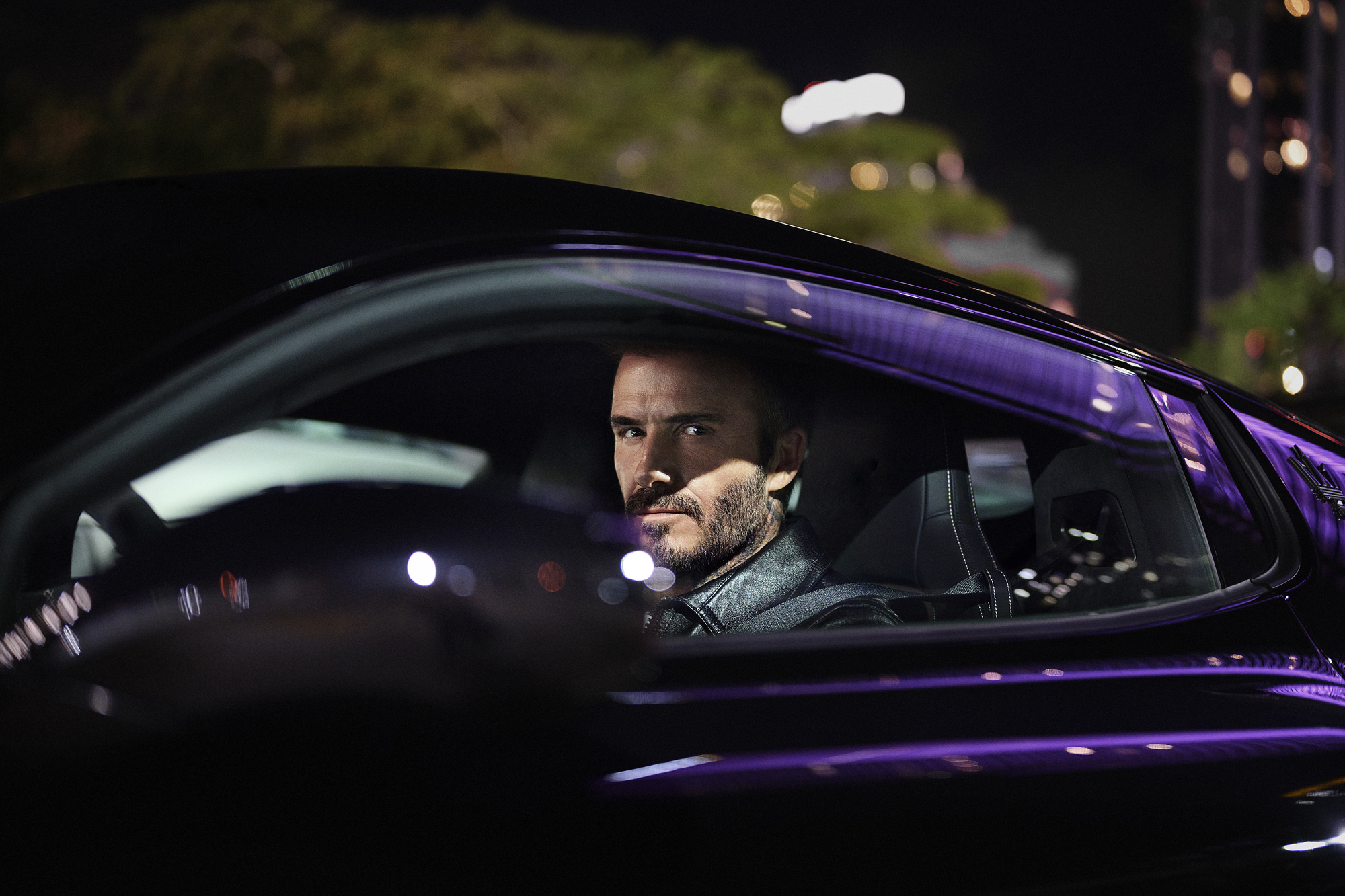